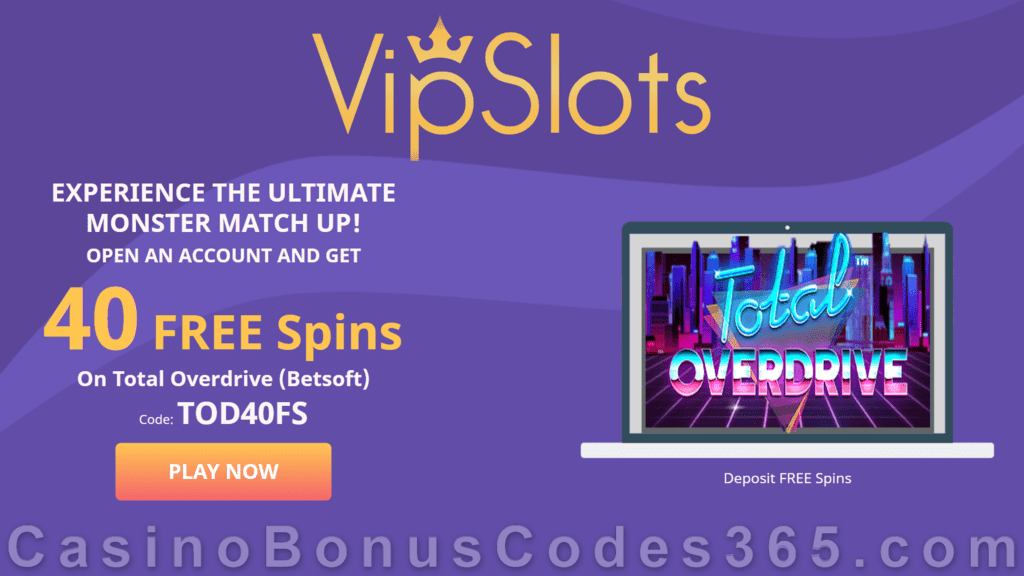 40 FREE Spins are up for grabs at VipSlots Casino!

The FREE Spins on the Betsoft powered slot game, “Total Overdrive” are all yours with a minimum deposit of $25.

TOD40FS is the code to unlock the 40 chances to WIN spinning the 3 reels of the cool electronica themed game. 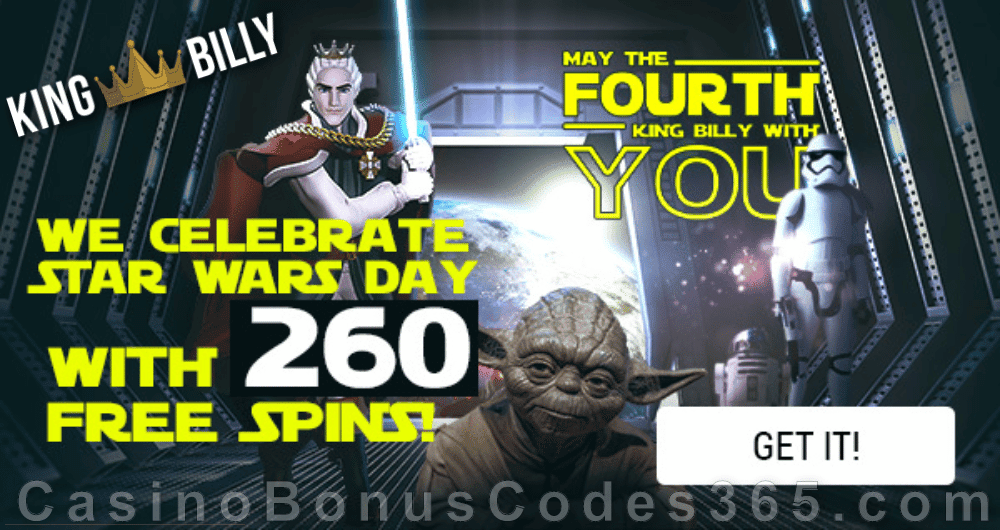 May the Force be with you!
Calling all Star Wars fan, May the 4th is LIT at King Billy Casino!

50 FREE Spins
FREE Spins Game: Mysterious
For players who claimed all 3 bonuses above.

How the Super Wild Weekend works? 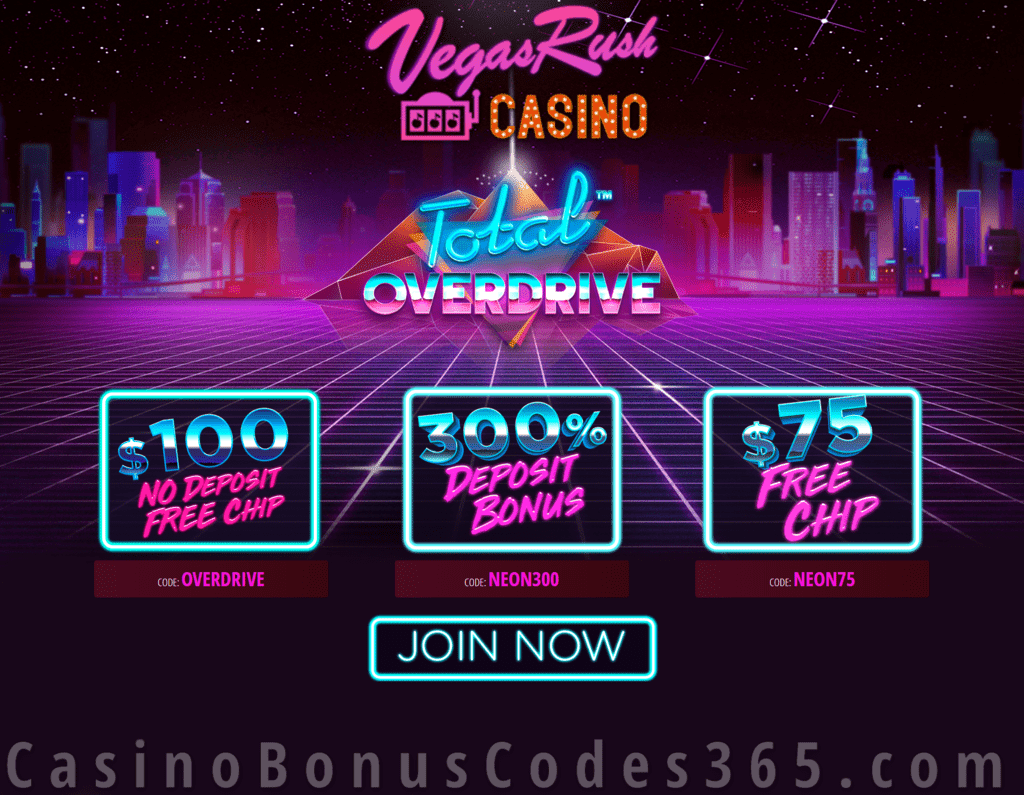 Catch the $100 FREE Chip at Vegas Rush Casino and lose yourself in the neon world of the Total Overdrive .

Join now and redeem the promo code: OVERDRIVE for the FREE Chip to be added to your account instantly!

NEON300 is the code for you to claim a 300% Match Bonus for a minimum deposit of $50.
But that’s not all!
Vegas Rush Casino has 1 more trick up it’s sleeve.
Once you have used the code: NEON300, an extra $75 FREE Chip will be credited to your account when you apply the no deposit code: NEON75.
*Vegas Rush Casino is no longer accepting players from Australia 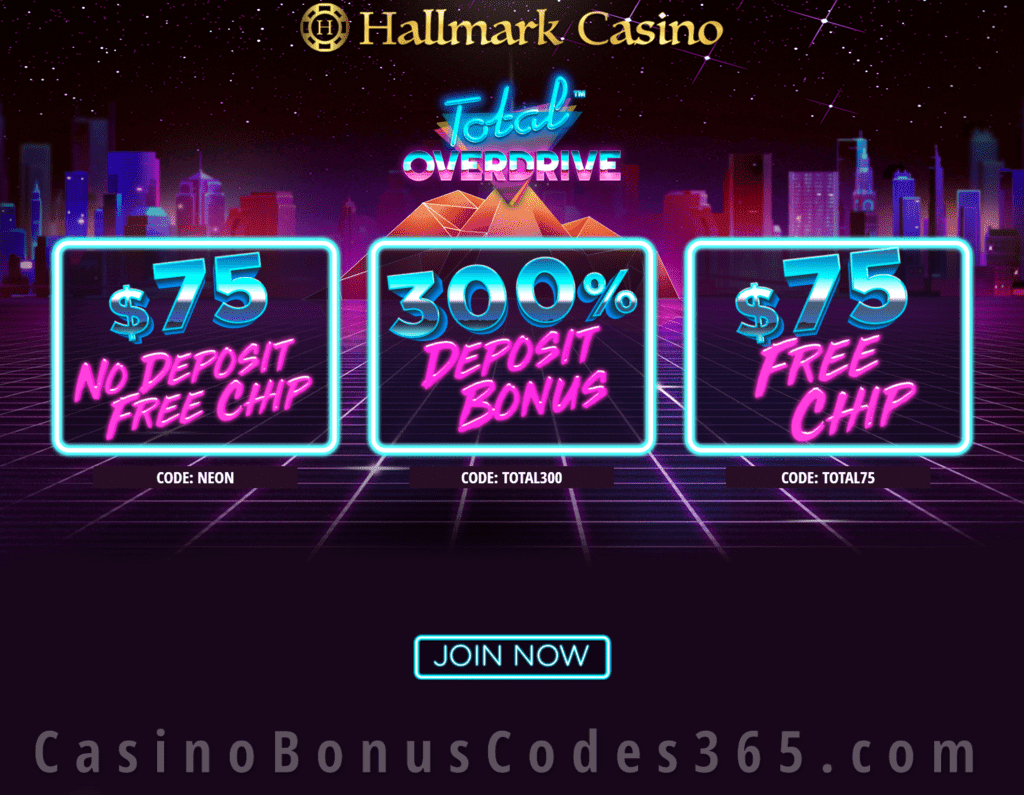 Go into Total Overdrive in the realm of bright neon electronica of WINs at Hallmark Casino!

Sign up now and a $75 FREE Chip will be credited to your account instantly when you use the promo code: NEON.
Next. get ready to have your mind blown with a staggering quadruple your money bonus for a minimum deposit of $50 with the the coupon code: TOTAL300!

More goodies follow after you have claimed the match bonus in the form of an extra $75 FREE Chip.
TOTAL75 is the code for you to activate the FREE money to play even more.
*Hallmark Casino is no longer accepting players from Australia

Next, add $25 or more to your account and play with double your money!

But that’s not all!
An amazing extra 100 FREE Spins on the 3 reels 5 paylines game are yours too.

Offer
All new players can enjoy 25 FREE Spins (no deposit) plus 200% up to $2000 on the first deposit (Standard Welcome Offer).

Game Description
Ride a cool rush into a world of neon electronica with this 3 reel, 5 paylines video slot.
With fresh designs of cherries, bells, diamonds, bars, and 7s, this update of the classic fruit machine with awesome laser effects and a driving soundtrack is sure to inspire nostalgia.
The heart of “Total Overdrive” is the Overdrive Multiplier.
Every winning spin will increase the multiplier, and the multiplier will continue to increase with consecutive winning spins. Watch the electric filaments build in intensity with each multiplied win!
But it doesn’t end there. The Overdrive Multiplier can also become Sticky. This means it will hold in place for a duration of spins, even if there are no more consecutive wins. The Overdrive Multiplier hold can even re-trigger while active, pushing the multiplier level and win potential into real Overdrive!

The Fruits4Real‘s 3 in row bonus is back by popular demand!