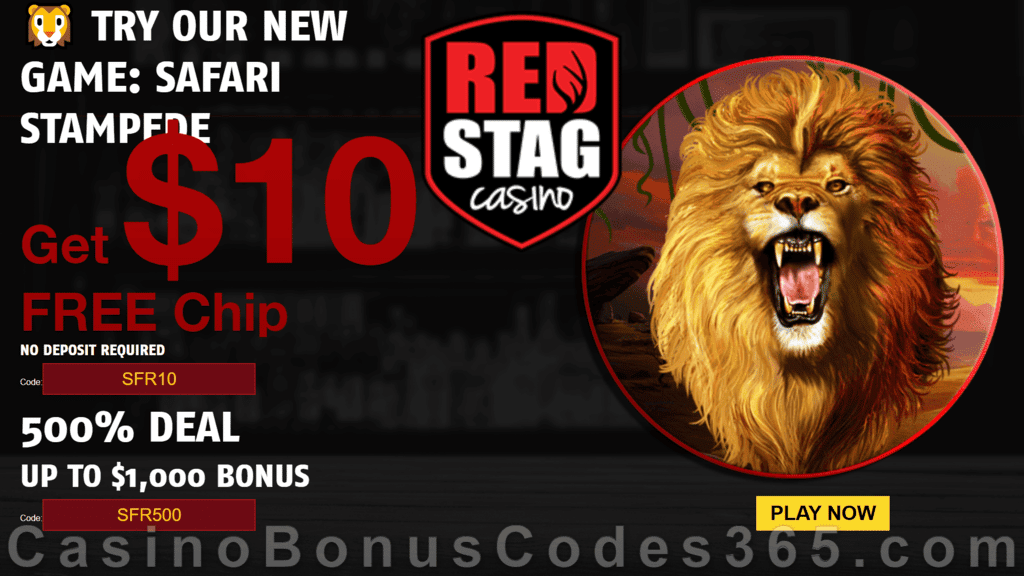 Hop on the 4×4 and take a tour of the magical world of Safari in Safari Stampede!
The Dragon Gaming powered slots game is LIVE at Red Stag Casino!
All new players get the chance to try out the 5 reels of the 10 paylines game for FREE.

Use the no deposit code: SFR10 at the cashier and a $10 FREE Chip will be credited to you instantly!

Meet African Wildlife and Win
Taking its inspiration from the great African plains, Safari Stampede will transport you to the magical world of savannas and rainforests, filled with all kinds of majestic animals ready to help you land a big win.
Spinning the reels of this African wildlife-themed slot will reveal all kinds of native animals for you to meet, making it great for animal lovers and brave adventurers alike.
The captivating design of Safari Stampede is accompanied by a relaxing, rhythm-filled soundtrack inspired by the music created for Lion King and perfectly matching the game’s proud background. Are you ready to journey the world of beautiful, if dangerous, creatures that share our planet?

Follow Stampede With FREE Spins and Respins
Safari Stampede has two great features. The first is a FREE spins feature that is triggered when you land three or more bonus symbols.
Depending on the number of scatters landed, you can receive 8, 10, or 12 FREE spins. However, what makes Safari Stampede unique is the Re-Spin feature that’s activated once you land a Wild Reel. After every re-spin, the Wild Reel, featuring the mighty lion, will move one position to the right while your re-spins continue so long as the Wild Reel is present.
This means that, if you land this special lion symbol on the leftmost reel, you could end up with up to four consecutive re-spins!

Safari Stampede Symbols, Paylines, and Betting
The game features four high-paying symbols plus four low-paying symbols. The low-paying ones are African-styled playing card suits, clubs, hearts, spades, and diamonds, while the high-paying ones are a bird, an elephant, a gorilla, and a rhino.
There’s also the lion wild and the bonus which is depicted by a pink crystal. The game has a standard 5×3 grid with 10 fixed paylines and an expected RTP of 96.12%. The minimum bet per line is $0.01, meaning the minimum overall bet is $0.1. The maximum that you are allowed to bet per spin is $20.

Seirei Academy
Luck comes in all shapes and sizes, and the power that Soul Reapers have can be turned upside down. Seirei Academy is an online slot inspired by the popular anime television series called Bleach. Your job is to spin the reels as you travel to Seireitei and hope for a safe and rewarding journey.
The game features several seriesinspired characters, and animations are made to resemble the memorable places from Bleach. If you’re a fan of manga and anime, make sure to try this online video slot.

Hero School
Would you like to have superpowers? Are you tired of being Quirkless? Hero School can help you change that. Inspired by My Hero Academia, this online video slot will take you on a unique journey through a school where superheroes are trained.
As you spin the reels, you’ll be able to meet other heroes-to-be, and some who have already obtained special powers – to grant hefty rewards to a lucky winner. If you like anime, you should definitely

Buffalo Bounty
Inspired by the lush flora and fauna of the wild west, Buffalo Bounty takes you back to the land where buffalos and elks roamed FREE across unexplored American plains. Explore this vast landscape filled with gorgeous nature and ride along with wild animals.
Buffalo Bounty is a tribute to the unspoiled American wilderness, which was home to many interesting species, including thousands of buffalos. The reels of this slot are filled with animals that were symbols of the civilization that developed on the New Continent.
The fantastic design of the landscape and animals is accompanied by epic old western music that perfectly fits the game’s mood. Are you brave enough to set out on an exploration journey on the frontier?

Safari Stampede
African wildlife has been a source of inspiration for many creators around the globe, and Safari Stampede is no exception. The game will transport you to the magical world of savannas and rainforests filled with all kinds of majestic animals ready to help you out land a big win as you spin the reels of this fauna-inspired online video slot. The game features all kinds of animals, making it a real treat not only for animal lovers but also for brave adventurers who are ready to go on a journey to the world of beautiful yet dangerous creatures that roam our planet. The captivating design of Safari Stampede is accompanied by a rhythm-filled yet relaxing soundtrack inspired by music created for Lion King.

Shinobi Wars
Inspired by the popular manga and anime Naruto, Shinobi Wars<™ will put you into the fantastic world of ninjas. Spin the reels of this slot to train with legendary shinobis and win hefty prizes as you learn new techniques with Naruto and his friends.. The game is influenced by the popular manga drawing style, so most of the game's symbols are very distinct and colourful. If you're a fan of the popular series, you're going to enjoy the company of your favourite characters and their unique powers as you spin the reels.