Oshi Bitcoin Casino international drive pushes on, more languages are now available on site.
English is the de facto international language. But it is very important that other languages are not neglected for a truly international igaming site.
As a result of Oshi efforts, the language coverage has been extended from English to Russian and Swedish. Portuguese is the latest language to join the Oshi family.

The banking option will be expanded in the near future too with SEK and CAD joining BTC and EUR as currency options for deposits and withdrawals.
Established in November 2015, Oshi initial intention was to offer an igaming platform for the Bitcoin community. The success of Oshi Casino means that demand for FIAT currency acceptance is growing. However, the cryptocurrency gamers will always be part of our focus.
EUR were the first to come on board early in 2016 shortly followed in October of the same year by AUD, RUB and USD – although it’s important to note that the United States remains on the restricted list and residents of that country are excluded from play.
The additional FIAT currencies have made Oshi Casino more accessible from all around the world. Further developments is in the works and Oshi will be making more announcements when they are confirmed.
Oshi is striving to provide gaming experience to players across the globe. It is a competitive advantage Oshi has over many other casino and sportsbook providers which are focussing entirely on one region
“Today, operators tend to create casinos to suit specific regions, whether that be in terms of branding or functionality,” said Oshi Affiliates manager Marko Csokasi.
“While this is great, Oshi is a brand which caters for the vast majority of the world, therefore the internationalization of the site has been a key moment. While Oshi isn’t known for the flashy design, we thrive to make the core casino functionalities work better than anywhere else – players deserve this internationally.”
Oshi is all about giving the widest choice to the player and that starts with a great range of slots, table games and more from a list of popular software providers. For instance, SoftSwiss, iSoftBet, NetEnt, Mr Slotty and more.
In line with the expansion roadmap, Oshi has continued to develop by offering Russian, Swedish and Portuguese to open up the Oshi gaming experience to more players who otherwise excluded by a portal that was restricted to an English-only version.
Oshi is committed to remain a fun destination for the Bitcoin community but the gaming world as a whole needs more choices. With the availability of multiple languages and more currencies being added to the roster progressively, Oshi Bitcoin Casino is well on the way to achieving that objective. 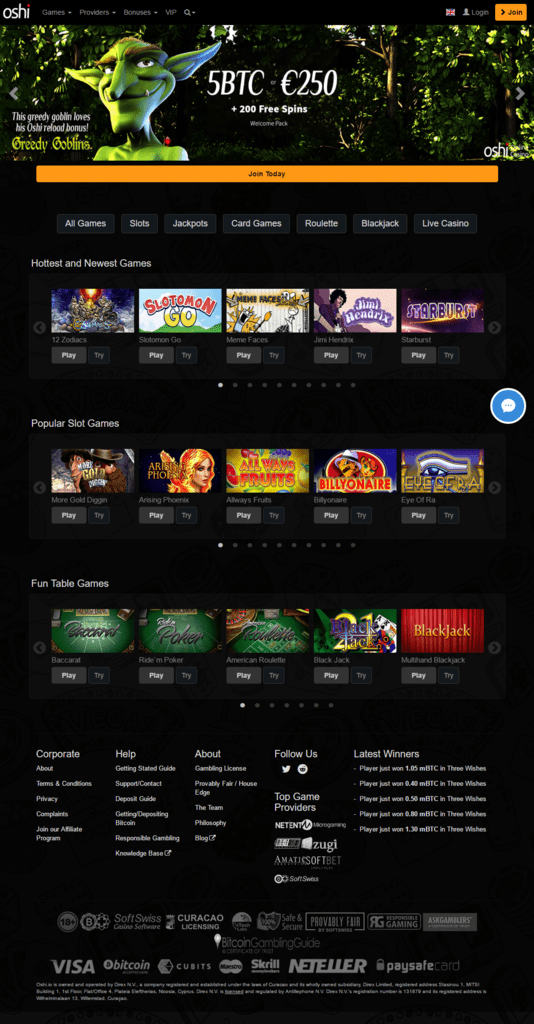